94 points Robert Parker's Wine Advocate
"This white is produced with the Albilla grape, a unique variety found almost exclusively in the village of Villamalea, and the 2017 Reto comes from seven different plots fermented separately with indigenous yeasts in 600-liter oak barrels and 1,500-liter oak foudres, where the wine matured with the lees for seven months. 2017 was a very early harvest, and the wine has a cool-climate, austere personality, based on stony minerality and acidity. This was picked the 5th of August, extremely early and with 13% alcohol. This is a mineral white in the style of a Bairrada from Quinta das Bagéiras, a Sancerre from Vatan or Agua de Roca from Matías Michelini. Liquid rocks! This has to be the finest vintage of this incredible white. It's vibrant and has the coolness and strict texture of the granite soils. 13,000 bottles were filled in March 2018."

Jancis Robinson
"Albilla de Manchuela/Albillo de Albacete. Seven small vineyards on different soils. No malo. 10 months on lees in foudre and older barrels.
Complex aromas of creamy lees, sour citrus and green fruits. Intense and very salty on the palate with lovely ripe fruit but no fruit sweetness. So salty and fresh. So complex already and rich in the mouth. 17/20 points. (JH)"

Vinous Reverie Notes
Jancis Robinson - Previous Wine of the Week
"I'm currently very excited about a number of unusual dry white wines emerging from Spain.
Wine writer Victor de la Serna came to dinner with us recently, along with our Spanish specialist Luis Gutiérrez and their co-author and sherry specialist Jesús Barquín, and brought (inter alia) a bottle from Bodegas Marañones, who produced this earlier wine of the week. Marañones, Piesdecalzos 2009 Vinos de Madrid is the superior bottling of Albillo grapes grown in the increasingly fashionable Gredos mountain range 50 miles (80 km) west of the Spanish capital that is home to some ancient Garnacha vines capable of making extremely fine reds, too. This dry white wine is even more concentrated than the Picarana 2009 I drew to your attention a year ago and with its hint of beeswax on the finish reminded me of a young white Hermitage. Unfortunately it is produced in such small quantities that it is difficult to find, but it is certainly further evidence of the quality of the Albillo grape, or perhaps I should say 'grapes called Albillo'.
Today's wine of the week is just as thrilling, though much nervier, and is made from a grape known by its makers as Albilla. (Albillo and Albilla are names applied, sometimes without much precision, to several different grape varieties around Spain; our big grape book, to be published by Allen Lane and Ecco next October will shed a bit of light on Albillography.)
Ponce, Reto 2010 Manchuela comes from the high-altitude wine region east of Madrid where Victor de la Serna's own wine operation Finca Sandoval is based. (The Manchuela DO is highlighted in dark pink on the map below.) Here's what UK importers Indigo Wine have to say about the Manchuela producer Ponce (a rather unfortunate name in English but pronounced 'pon-thay' in Spain):
Young, up and coming winemaker Juan Antonio Ponce [pictured above left] is a passionate advocate of the native grape variety, Bobal, and learnt many of his skills from his father, who still works in the vines. Juan Antonio has studied and travelled extensively in France and, like his friend Daniel Jiménez-Landi [see this wine of the week], he has been seduced by the theories of biodynamics. Clos Lojen is a fresh example of Bobal grown in this way and is a great introduction to his wines. PF (which stands for Pie Franco) is made solely from ungrafted vines from 65 to 85 years old, onlimestone and sand. Pino is from a cool sited vineyard of 30 years which produces very elegant fruit. Finally the stronger more masculine Estrecha comes from a single limestone vineyard of 75 years. All stunning wines that should not be missed.
The dry white Reto is so new that it has not yet even made it on to the Indigo website but when I came across it on taste at The Sampler, South Kensington, I was moved to give it a score of 17.5 and I reckon it should drink well for at least the next three years. It has real structure and potential and I loved its honey and apple-skin aromas. The Sampler's own tasting notes mentioned 'waxy preserved lemons'. Certainly this is one of those full-bodied whites with great tension and not an ounce of flab. In fact, it's so nervy I could imagine enjoying it without food, even though it should stand up to quite a lot of competition on a plate. The alcohol level is a robust 14.5% but it is not heavy. The bottle looks good too – very simple, classy design.
It is just one of an army of dry whites that is posing an ever greater challenge to white burgundy. In the last week I have by chance found myself discussing the perilous state of white burgundy with several fine-wine specialist traders. It will surely become more and more difficult to sustain the price levels of smart white burgundy as wines like these Spaniards and a host of others from all over the world continue to present vibrant and thoroughly satisfying competition. (And this even without the spectre of premature oxidation that has haunted white burgundy.)"

Winery: Reto is the first white wine made in our winery. It is produced from 4 different vineyards between 40 and 60 years old. Grape varietal is Albilla and vineyard soil is mainly calcareous. Wine is aged for 8 months in old barrels 600-700 liter capacity. During harvest, grape are stored in cases and are kept refrigerated over 48 hours in order to temperature up to 43ºF, then grapes are pressed by using a vertical press system. After pressing, must is kept in fermented in barrels with lees at 60ºF. Yield is 20hl/ha. Aging is conducted on lees until bottling. 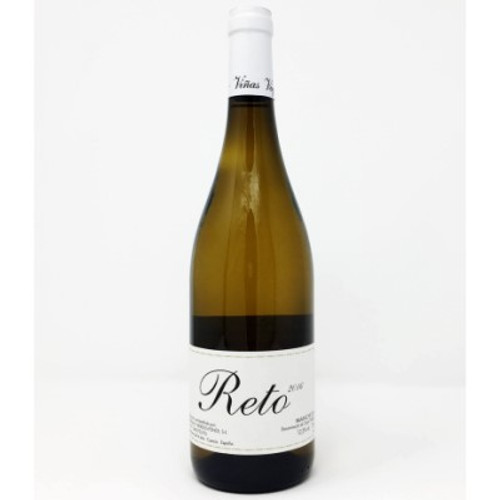