Vinous Reverie Notes
Jancis Robinson - Previous Vintage Review
"It's an ill wind that blows no good. It seems as though the current fashion for indigenous grape varieties and a diminished interest in international varieties is working in favour of penny-conscious wine enthusiasts if two Spanish red-wine bargains to have come my way recently are anything to go by.
Chez Jascots I came across Solano Vino Tinto 2011 Spain that they sell for just £6.30 per single bottle. It's a delicious unoaked blend of Syrah, Garnacha, Tempranillo and Cabernet Sauvignon that is so cheap because the makers aren't especially interested in something without obvious local roots.
The reason Jiménez-Landi, Bajondillo 2011 Méntrida is so inexpensive is the same. I have written about this excellent producer south west of Madrid before. They made this wine of the week back in January 2009. I came across this organically grown Bajondilla blend at the Dirty Dozen tasting in September. It's round, fruity, mouthfilling and each mouthful lasts for ages. The only reason it's as cheap as it is is because Bajondillo has become a repository for Jiménez-Landi's international varieties and they don't like international varieties! Indeed, I can't even find any mention of this wine on their website*.
For the background to the wine, Syrah with much older Garnacha, see this PDF...
I make no apology for making yet another Spanish red my wine of the week. As you'll see from my selection of top 25 reds tomorrow, Spain is the source of so much great value, at all price levels.
*Olly Bartlett of UK importers Indigo Wine, who have in their portfolio so many great Spanish wines off the beaten track, explains: 'It is not on their website as it is a wine they do solely for export. Dani's parents have some vineyards just outside Mentrida where the bodega is, planted with Tempranillo, some Cabernet, Merlot etc that they planted when such things were seen as a good idea! Dani when he was a very young proto-winemaker had a bit of a thing for Syrah as well and planted some. So Bajondillo is kind of a way of using this up and making a great little wine that opens doors for the main love of his life, his amazing Garnachas from the mountains. I think he uses it to season his barrels as well, as he uses only old oak for his Garnachas.'
Et voilà, as they say where I am in the southern Rhône, land of Garnacha."
A family winery pioneering Garnacha-driven reds in DO Méntrida (Central Spain), Jiménez-Landi tend 20Ha of their own plus 5Ha of rented vineyards. Vines are located on the pasture, scrubland landscape of Méntrida, the village in the lower part of the region, and the rugged hills of El Real de San Vicente, the only village in the appellation within the boundaries of the Gredos mountains. Vines are planted at 550-650m on the plain and at 750-850m on the mountains. Sandy granitic soils are dominant in both areas. Wines are made in the estate’s ancient 16th century manor house. The old cave where large earthenware jars were kept is now used as bottle storage. The estate nowadays draws on the sweeping changes started in 2004 by cousins José and Dani Jiménez-Landi (Comando G, Dani Landi Viticultor) when they started producing terroir-driven Garnacha wines -a style that José has since continued on his own. Grapes for Bajondillo are sourced from La Dehesa, a vineyard near the winery. Bajondillo is exclusively aged in concrete tanks and includes a small amount of Cabernet in the blend. Varietals: 85% Garnacha, 10% Syrah 5% Cabernet Sauvignon 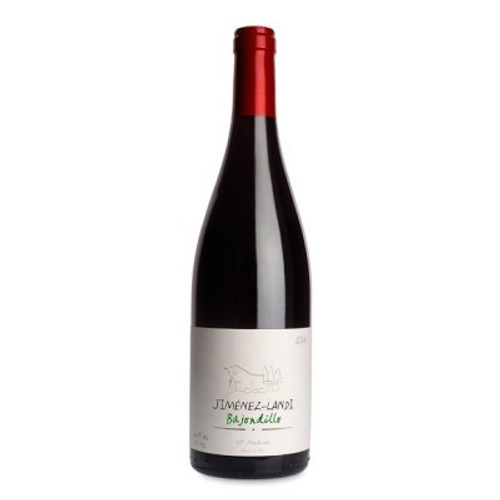