92 points Wine & Spirits
"Lodi’s Bechthold Vineyard may be the oldest cinsault source in California, a dry farmed site on a decomposed granite wash from the nearby Sierras. It can produce cinsault of unusual depth, and yet Birichino’s bottling consistently goes against type for such a warm place: This is just 13 percent alcohol, but punches above its weight with a peppery freshness and verve, light bodied and mildly herbal, with vibrant acids for a charcuterie board."

Vinous Reverie Notes
Winery: Lest anyone dispute the virtues of old vines, one need only look to Bechthold Vineyard in Lodi. The site itself has its pros and its cons. It can be, and is, farmed organically, and without irrigation. The soil type, Tokay Fine Sandy Loam, is rich in granitic minerals washed down from the Sierra Nevada over the millenia by the nearby Mokelumne River. Lodi is the coolest area of the Central Valley, the evening temperatures moderated by breezes from the Sacramento River Delta. However, beastly hot daytime temperatures during July and August can be punishing for the vines, and the workers who tend and pick them. Grapes from younger vines in the neighborhood, albeit of different varieties, are demonstrably greener at the same levels of ripeness, as is typical in warm climates, and after weeks-long stretches of 100+ degree temperatures look as though they have been through a few rough innings. By way of some only partially understood alchemy, these 133 year old vines shrug off these high temperatures, and bring home fully flavored grapes at remarkably modest levels of alcohol, and often surprising acidities. Such is also the case around the corner at the neighboring Montague and Mule Plane Vineyards. The relatively thick skins of Cinsault and Carignane do not hurt their causes. All of this being said, Bechthold Cinsault, year-in and year out, shouldn’t conjure aromas of violets and irises and memories of Cru Beaujolais, but there you have it. 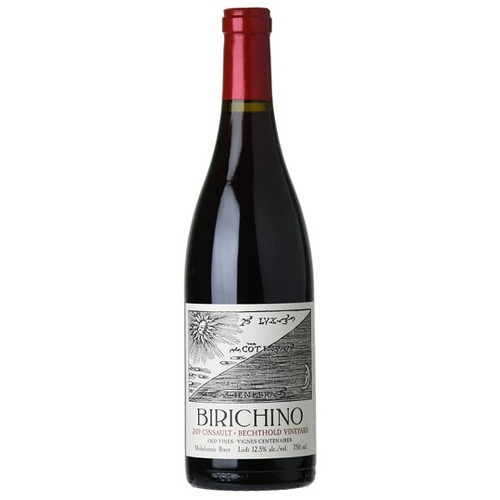