Jancis Robinson
Full bottle 1,333 g. From several different sites, some more clay, some more limestone.  Fermentation: 6–14 months in barrel, full malo. Aged 12–14 months in barrel, 10% new.
A little less obviously smoky/reductive than the 2018, with the fruit more to the fore: citrus that is both lemon and a little bit orangey. Also some toasty richness. More reductive/smoky on the palate than on the nose, with possibly even greater intensity of fruit and higher-tasting acidity than the 2018 (which was a warmer vintage and had longer in oak for that reason). Fabulous concentration of flavours but with no heaviness. Highly complex and multilayered for such a young wine, with a long salty finish, like the 2018. Not quite as savoury as the 2018, more mouth-watering, and with that mineral tension that you can taste even with the intensity of the wine. Once again, VVGV *very very good value*. 17.5/20 points. (JH)"

Vinous Reverie Notes
Jancis Robinson - Wine of the Week
"A jewel from the Jura's most prominent wine producer.
If you don't want to splash out on one of Stéphane and Bénédicte Tissot's excellent single-vineyard Chardonnays, for example the Clos de la Tour du Curon, from the Arbois region of the Jura, eastern France (see the top part of this map of the heart of the Jura), their Patchwork bottling is a brilliant and well-priced alternative. (This picture of Stéphane Tissot in the Clos de la Tour du Curon vineyard, taken a few years ago by Jason Lowe, shows how densely the vines are planted, each one trained to an individual stake.)
The price is even more appealing when you compare it with that of white burgundy of similar quality (premier cru?), whose prices are rising inexorably – and likely to continue in the same direction thanks to the very small 2021 harvest that Jancis wrote about last Saturday.
Patchwork, as the name suggests, is from several different vineyards, just over half grown on clay-dominant soils and the rest on limestone-dominant soils. According to Adam Bruntlett of the Tissots' UK importer Berry Bros & Rudd, even though these plots include old vines and 'some outstanding sites that would merit bottling separately, Stéphane doesn't want to inflate the range any further'.
The Patchwork Chardonnay 2018 took my breath away when I tasted it at the end of The Wine Society tasting in London last month. So I had intended to get some background information on the wine from Stéphane or his wife Bénédicte but they are way too busy with more important things: this year's harvest of their 50 ha (124 acres) of organically and biodynamically farmed vineyards, which they cultivate to make a huge range of styles, from Crémant to Macvin. I'd certainly rather they were concentrating on that than on keeping up with emails.
However, Bruntlett explained that the wine is made entirely in barrel, with 10% new oak, and full malolactic conversion. 'Ageing is usually around a year, with the wine bottled just before the next harvest, but Stéphane decided to give the 2018 an extra few months because he felt that the warmer 2018 vintage needed time in barrel to gain in freshness. Sulphur dioxide addition is very low – 30 mg/l total.'
The Patchwork 2018, to which I gave a score of 17.5 and assigned the label VVGV (very, very good value), is pale gold with a stunning aroma of smoky, savoury citrus, quite marked by that reductive smokiness but not quite as extreme as the struck-match character found in some Chardonnays or Sauvignon Blancs made more deliberately in that style. The texture is attractively and satisfyingly chewy, the fruit intense, the whole super-fresh, with a savoury, salty quality and a very long finish. It's a gloriously deep and pleasurable wine, from an intellectual as well as from a sensory perspective. It is one of the most striking Chardonnays I have tasted in a long time, particularly at this price.
Some retailers are already selling the 2019 Patchwork, which is a little less obviously smoky/reductive than the 2018, with the fruit more to the fore: citrus that is both lemon and a little bit orangey, as well as some toasty richness. It's more smoky on the palate than on the nose, with possibly even greater intensity of fruit and higher-tasting acidity than the 2018 (which was a warmer vintage and had longer in oak for that reason). Fabulous concentration of flavours but with no heaviness. Highly complex and multilayered for such a young wine, with a long salty finish, like the 2018. Not quite as savoury as the 2018, more mouth-watering. Once again, I gave it a score of 17.5 and unhesitatingly describe it VVGV.
I found it impossible to prefer one vintage over the other. If you can, buy one bottle (or more) of each. Both wines have an alcohol level of 14% and are perfectly balanced. Both will age well in bottle, the 2019 perhaps a little longer?
Stéphane Tissot took over the winemaking from his father André in 1990 and persuaded him during the following decade that conversion to organic farming was essential to achieve his quality and long-term goals, followed by biodynamic certification from 2005. The estate is still named Domaine André et Mireille Tissot even if Bénédicte and Stéphane's names are prominent on the front label. In her book Jura Wine (Wine Travel Media, 2014), Wink Lorch says of Stéphane: 'I believe that [he] has done more good for the region than any vigneron since Henri Maire', who, to use Lorch's phrase, 'pulled the region up by its bootstraps' after the Second World War. (See Wink's book for the full story.)
I very much doubt André Tissot regrets letting Stéphane have his way..." 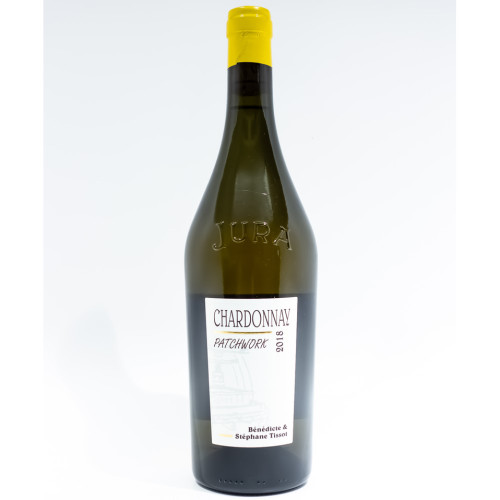